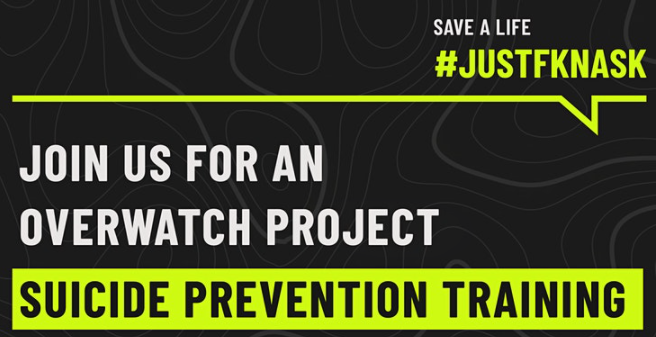 Learn new ways to prevent suicide and save lives with the Overwatch Project’s JustFKNAsk Initiative.

Participate in a free training provided in partnership with the MSU Billings Military and Veterans Success Center, Rehabilitation and Human Services, and Student Health Services, as well as the Warriors & Quiet Waters Foundation.

The Overwatch Project isn’t your usual suicide prevention initiative. It’s gritty and blunt and in your face, as it takes on a topic that is often taboo: the intersection of firearms and suicide. The Overwatch Project goal is to save lives by equipping people to #JustFKNAsk – and successfully intervene to discuss and make plans for protective firearms storage measures when a life is on the line. Basically, the Overwatch Project has built the equivalent of the “Friends Don’t Let Friends Drive Drunk” campaign for veterans and service members, only instead of talking about alcohol and vehicles, it’s focused on guns and suicide.

All are welcome. While the Overwatch Project has a focus on the military and veteran community, anyone who is concerned about suicide in Montana can benefit from this training.

NOTE: The Overwatch Project will host a separate breakout event for veteran and military veteran members immediately after this training. For more info: https://opmsubillingsfamily.eventbrite.com.

Previous Next
follow us on instagram @dogtagbuddies
Do you know what time it is? Time to purchase yo

We received the best surprise today! What we thoug

It's hard to put into words what we do. To distill

Our big event is being held at the historical Nort

Our gala is meant to be a night to remember. Thes

It's back to school time! We've got new puppy, bas